Noah is an integral part of the Zeng Granite Family. His main position is as a stone fabricator and countertop installer. He spends about half of his time in the shop and the other half out in the community installing countertops.

Noah says the best part about his job is seeing the finished product, all cleaned up and installed in a home. Since he often works with the raw slabs, fabricates them to the specifications of the home owner and then also gets to install them, he has the unique ability so quality check all the work!

Noah’s least favorite part of his job, doesn’t involve stone. He would prefer to pass on performing maintenance on the digital machinery we have in the shop. But he gladly performs when asked. His attention to detail is important for maintenance and we appreciate that at Zeng!

Noah lives with two roommates and one of their dogs, but he isn’t too far from his childhood home, which is also in Lincoln. His parents and older brother still reside in Lincoln, so he is able to see his family often.

If Noah were a piece of granite, he says his name would be Uba Tuba. LOL I guess you will have to ask him to find out why! 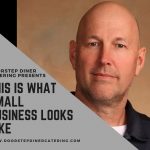 This Is What Small Business Looks LikeUncategorized